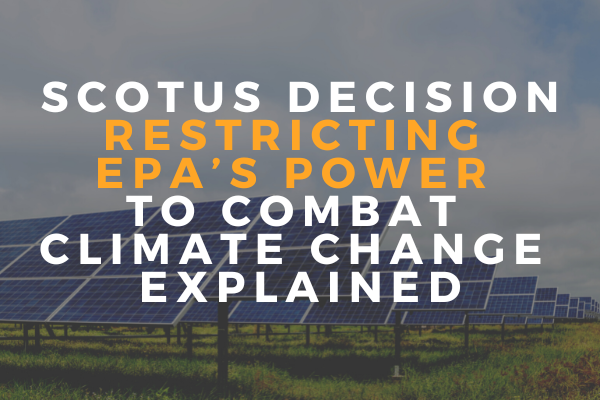 On June 30, 2022 the Supreme Court announced its decision in the West Virginia v. Environmental Protection Agency (EPA) case. In the 6 – 3 vote along partisan lines, the court’s conservative majority limited the EPA’s power to regulate carbon emissions from power plants.  This decision raises larger questions on the power of administrative agencies to address our climate crisis.

West Virginia v. Environmental Protection Agency limits the EPA’s authority in regulating emissions in the energy sector. The EPA can no longer regulate greenhouse gas emissions from coal or gas power plants under the Clean Air Act. West Virginia – the plaintiff – is one of the nation’s highest coal producing states. The question in the case, Chief Justice John G Roberts wrote in his opinion, is whether Congress intended to give the EPA authority to regulate the energy industry.  The “EPA can no longer sidestep Congress to exercise broad regulatory power that would radically transform the nation’s energy grid and force states to fundamentally shift their energy portfolios away from coal-fired generation,” he said.

In Justice Kagan’s dissenting opinion, she wrote that “The Clean Air Act was major legislation, designed to deal with a major public policy issue,” adding: “Congress knows what it doesn’t and can’t know when it drafts a statute; and Congress therefore gives an expert agency the power to address issues — even significant ones — as and when they arise.”

Justice Kagan shared that she anticipates the EPA having to deal with additional problems because of this case. She believes that the majority in this case are contradicting regulatory law and that they do not know how to address climate change, especially considering they will not listen to the expert agency. “Whatever else this court may know about, it does not have a clue about how to address climate change,” she wrote. “And let’s say the obvious: The stakes here are high.”

History of the Clean Air Act

In 1963, the Clean Air Act was established to limit air pollution and enhance public health as a result. The Clean Air Act also authorized the EPA to establish standards to regulate hazardous pollutants, protecting public welfare.

Additionally, the Obama administration pushed for more regulations from the EPA to aid in transitioning to cleaner energy sources rather than relying heavily on coal. They encouraged states to rely more on alternative, clean energy sources rather than coal with hopes of setting carbon emission limits. Ultimately, these goals were met as alternative energy sources were cheaper to produce than coal. Despite these steps toward a cleaner climate, coal still remains a primary contributor of carbon emissions that causes climate change.

With the recent decision questioning the EPA’s role in fighting climate change, many have called on the Biden administration hoping for him to act on his promise to control greenhouse gases. President Biden provided a statement on the decision in which he wrote “The Supreme Court’s ruling in West Virginia vs. EPA is another devastating decision that aims to take our country backwards. While this decision risks damaging our nation’s ability to keep our air clean and combat climate change, I will not relent in using my lawful authorities to protect public health and tackle the climate crisis. I have directed my legal team to work with the Department of Justice and affected agencies to review this decision carefully and find ways that we can, under federal law, continue protecting Americans from harmful pollution, including pollution that causes climate change.”

West Virginia politicians, including Attorney General Patrick Morrisey argue against federal agencies like the EPA, believing that they should not be able to make decisions with political or economic significance without explicit authorization from Congress. However, Biden ensured that he is taking action to protect the environment and combat the climate crisis. He hopes to work with states and Congress to create laws that protect people while working toward more clean energy systems. He ended his statement by writing “Our fight against climate change must carry forward, and it will.”

Democratic Governors Jay Inslee of Washington, Kathy Hochul of New York and Gavin Newsom of California are the three co-chairs of the US Climate Alliance. This group of 24 states is committed to climate action, especially given the recent ruling. The co-chairs emphasized that the state authority to limit greenhouse gas emissions has not changed despite the West Virginia v. EPA ruling. These three states are committed to producing electricity from non-carbon sources by 2040 or 2050, setting the standard for other states.

While the decision limits the EPA’s ability to regulate carbon emissions of existing gas and coal power plants, it did not take away the ability to regulate greenhouse gases and protect people from pollution. Joseph Goffman, President Biden’s nominee for the EPA’s air chief, assured that the EPA’s strategies in fighting climate change have not changed. The Supreme Court decision may have shifted what the EPA’s plans for regulations look like, but overall the EPA is still set on reaching its climate goals.