Wind Power Or Solar Power: Which Is Best For You? 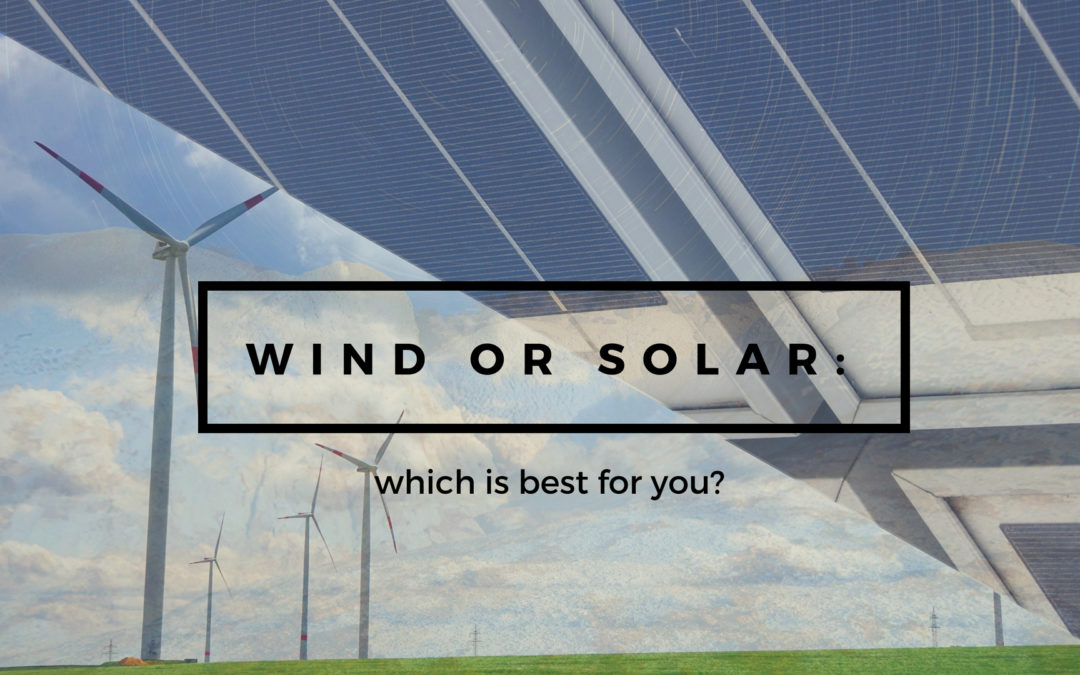 On my property I want to get solar power, wind power, the whole lot.
We often meet enthusiastic customers, and we are so happy that people are looking for ways to reduce their carbon footprint. The terms “solar power” and “wind power” are often used interchangeably, in these conversations.

Even though Artisan Electric, Inc. specializes in solar power, we support all forms of clean, alternative energy sources – especially wind power! Our end goal is a clean planet, and we know wind power will be a strong catalyst in making that happen.

But wind and solar work differently, and one might not always be the best fit for a certain project. So it’s important to understand what each power source will need to be efficient.

According to the Renewable Resources Coalition, wind is actually a form of solar energy. Winds are created by a combination of uneven surfaces of the Earth, the Earth’s rotation on its axis, and imbalanced heating of the sun across our atmosphere.

Wind turbines are best suited for areas with consistent wind and lots of space with no obstructions, such as trees or buildings.

In Western Washington, very few locations are ideal for wind turbines, especially for residential use. We often hear from enthusiasts that their location “would be perfect for a wind turbine.” And that may be true occasionally, but more times than not this is not true on average. This is because average windspeeds are typically not high enough to justify the wind turbine.

As a rule of thumb, a location needs consistent wind speeds of a minimum of 5 meters per second (m/s) to justify installation (see Washington 30-Meter Residential-Scale Wind Resource Map). It is true that certain microclimates may be suitable, such as those along western-facing bluffs above water and ridges, but usually these locations are few and far between. To know for certain how suitable a location may be, it is advisable to go through a minimum 1-year feasibility study.

In the simplest terms, solar power works when sunlight is converted to electricity. This happens when electrons are knocked loose from silicon semiconductors by the sunlight’s photons.

Solar panels work best when facing south, east, or west, in an area with few obstructions. It’s generally easier to integrate solar panels into a small space than it is for wind turbines.

Neither of these energy sources are better than the other- they’re just different and thrive in different environments.

If you are in and urban or suburban area in the Puget Sound, which has abundant trees and buildings, wind may not be your best option. Solar can integrate onto your rooftop or property and requires less surrounding space to effectively produce power for your building.

If you are in a rural area free from obstructions that receives moderate amounts of wind and sunlight, solar panels and wind turbines could both be an excellent option for you. A properly sited wind turbine can be an asset and complement to a solar array. Solar is effective when the sun’s out, which often happens when there is not much wind. Conversely, it’s often windy at night or when it’s cloudy.

To find out if solar can cover all of your home or business’ energy needs, sign up for a free site assessment.