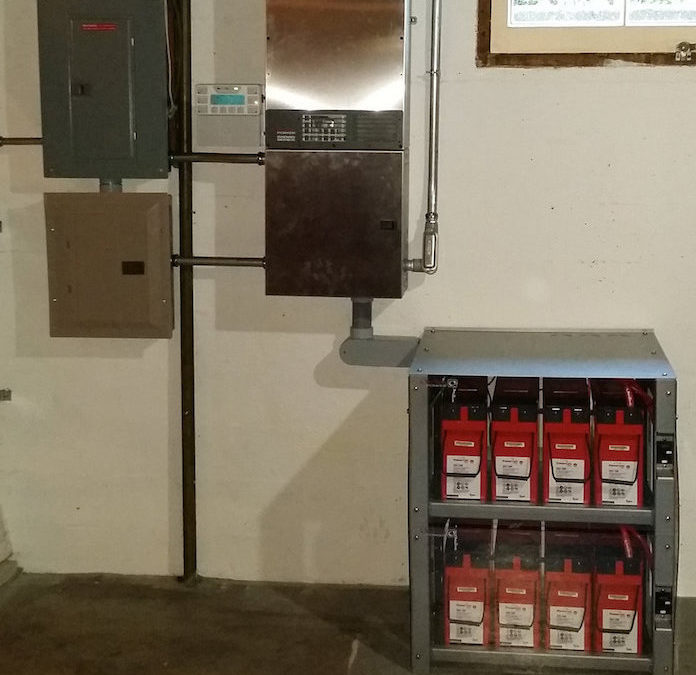 As the weather gets colder and the storm season continues, customers are asking us how they can use their solar to keep the lights on. We have been seeing more interest in backup power than usual over the last few weeks, partly because a competitor sent out a mailer to our solar customers promoting the sonnenBatterie battery-backup solution. On top of that, Tesla announced the new and improved Powerwall 2 last Friday. More customers than ever are wondering if now is the time to get a residential battery backup system.

The vast majority of solar PV systems installed in the U.S. are grid-tied systems without batteries, meaning that when the solar homeowner loses power, the grid-tied inverter shuts down and waits for the grid to return. Without batteries to store solar power and release it as needed, there is no way to safely use solar during a power outage. Imagine trying to match an unknown quantity of energy loads from your lights, plugs and appliances with an unknown supply of solar power. Both change from one moment to the next and will almost never match each other, leading to appliances burning up and burning out in your home. Moreover, unless solar can isolate itself from the grid like a generator, lineworkers run the risk of being electrocuted by the backfeed while repairing the grid. When installed properly, however, batteries allow solar homeowners to use lights, plugs and a fridge indefinitely during an outage.

The sonnenBatterie battery backup system is an all-in-one inverter and lithium iron phosphate (LFP) battery sized between 4 kWh and 16 kWh. This system needs a second grid-tied inverter and is made to retrofit existing systems. Unfortunately, the Sonnen battery and the first generation Tesla Powerwall are not what most Washington residences are looking for; they are not actually made for power outages. Sonnen and Tesla are primarily focused on markets where there is no net metering, power is expensive, or customers are charged different electricity prices depending on the time of day. None of these factors are a reality Washington State. Both companies will flat out say that if you are able to sell your power back to the grid via net metering, their product is not for you. In other words, these battery technologies are focused on optimizing self-consumption and avoiding peak utility rates. As such, their battery technology is designed to be discharged and recharged daily, like a cell-phone battery. Moreover, they only provide enough power to run a few lights, plugs and a refrigerator for half a day in bad weather. If customers buy these batteries purely for power outages, the batteries will rarely be used and will deteriorate quickly over time. When they are actually used in a power outage, the customer will then realize they can only keep the lights on for a short time.

For our solar customers looking for a robust alternative to a generator during power outages, we recommend the OutBack Radian system made here in Washington State. OutBack has been focused on battery backup technology for decades, and they make an inverter / battery retrofit specifically for power outages. The batteries can be kept in standby, unused for over a decade with very little degradation, and the inverter is one of the most sophisticated ever built. OutBack’s EnergyCell GH batteries coupled with the Radian offers more power for thousands of dollars less than Sonnen, and best of all it is available right now, locally. If you want to add batteries to your system this year, this is what you need. Give us a call and well gladly give you a quote.

If you do not need battery backup right away, it may make sense to wait for more battery technologies to emerge as the market develops. Several technology breakthroughs will be happening in 2017, including the Powerwall 2, which has twice as much energy storage as the original. Tesla’s gigafactory will increase production, which was a huge problem for the first Powerwall. Also in 2017, SolarEdge will partner with LG, whose RESU battery will be introduced to the American market. Customers with SolarEdge inverters can easily retrofit them with the RESU battery at an affordable price. Also towards the end of 2017, OutBack will be introducing SkyBox, which will be more versatile and efficient than it is flagship Radian technology.

So, there may be good reason to wait for this technology to mature, especially since we have one of the most stable electric grids in the US. We firmly believe that as our grid and relationship to power changes, most solar customers will eventually integrate batteries into their homes and businesses. It is just a matter of when, and judging from developments in the market, we will start to see mass adoption of batteries in the solar market within the next 48 months.